by Fred Maingi 30 March 2011, 17:04
The families of three players who excelled in the just ended Kenya/Brazil Football League have every reason to smile after their beloved talents earned an all paid-up trip to Brazil.
The trio, two boys and a girl all under 15 years will leave the country later this year for South America where they will receive advanced soccer training at the Palmeiras Sports Academy in Brazil.
John Macharia from Korogocho village, Kevin Owino (Kibera slums) and 13 year old Elizabeth Majuma from Kibera were all smiles when their names were picked by the Brazilian Football instructors who have been in the country for the last 10 days.

Elizabeth Majuma was unable to control her delight.She said the trip to Brazil would open new doors for other players. The Standard seven girl from Kibera’s Toy Primary school said she was overwhelmed and felt humbled when she was named among the top three for the Brazil trip.
"I had no doubt I will be picked since I have all the attributes of a soccer player. I can run for two hours non-stop with the same speed. I do dribble very well and even beat boys in their own game. I have won several trophies in football since I play for my school team. it was not a surprise,” quipped a delighted Majuma.
She paid tribute to Sadili Oval Academy for initiating youth tournaments adding that she never dreamt of meeting World greatest tennis player like tennis legend Serena Williams.
"Through Sadili Oval Academy, I was able to meet and greet Serena and other great elites.I sincerely thank Sadili Academy Director Dr.Liz Odera who has transformed me and others to become young celebrities.I believe in few years, I will be splashing headlines in your local newspapers,” she said jokingly.
Posted by Sadili Oval Player Testimonials at 12:46 PM No comments:

Brazilian club Palmeiras FC jets in ready for Gor Mahia
Posted by Sadili Oval Player Testimonials at 11:18 AM No comments:

Soccer: Helping Children Reach Their Goals One Game at a Time - DivineCaroline

Soccer: Helping Children Reach Their Goals One Game at a Time - DivineCaroline
Posted by Sadili Oval Player Testimonials at 11:08 AM No comments:

Ligi Ndogo 4 Sports For Life 2
The Brazil Kenya football league Grand finals  played at the Nyayo National  Stadium left most Kenyans in awe as the best two teams from the best two centres met at a thriller in Nyayo Stadium. Tension was rife within both camps before the game and as usual flashes of lost chances would not fail to cultivate a rather technical game that could have already been sealed within the first half. The Green Ligi Ndogo was trailing 2-0 after a superb shot from Kevin Owino in the 9th minute and another well struck drive by Onyango Erick. Things however turned sour for the blue and white Sports For Life when Gicovi Julian started the rout in the 37th minute and Shaban Mohammed placed the ball past the goal line in the 39th minute. It seemed a rebirth of the semifinal tie that pitted Nature and Sports and Ligi Ndogo when Ogutu Chris hit the back of the net not once but twice in the 47th ad 53rd minutes respectively to deny Sports for Life their Maiden trophy for 2011 infront of such a charismatic crowd, from Brazil Olympian and Expo Ambassador, Ms. Adriana Behar, and Her Excellency Anna Marie Sampaio Fernandes, Brazil Ambassador. Sadili Queens kept our supporters chanting having already lifted the girls U15 trophy, while Sadili Nature and Sports Boys were 2nd runners-up

Posted by Sadili Oval Player Testimonials at 1:06 AM No comments:

Ligi Ndogo 2 Nature and Sports 0
Chris Kibet must have got the better of goalkeeper Levis Osena’s loss of concentration when his superbly carved freekick deflected against Brian Bwire’s head to slither into the net in the 14th minute. He went ahead to strike a neat drive into the back of the net at the 27th minute when Brian Bwire failed to contain his increasing pressure. On the other hand Kennedy Moya could see his slow drive being cleared at the edge of the area when all was clear for a goal that could have sealed the game for the Nature and sports in the 16th minute. Ball possession may be an art unique to nature and sports but their goal hungry traits were switched off in this encounter.
Sports For Life 3 Lavington United 0
Jamin Luvembe, Charles Onyansi and Jesse Mwendia got the best of the already back-trotting Lavington United side that only showed quality in perseverance character. Charles Onyansi slotted in the Penalty at the 5th minute when Jamin Luvembe was brought down inside the area. Mwendia Jesse shook the net in the 19th minute after a neat pass from Duncan Ochieng. Jamine Luvembe then sealed
Lavington’s fate in the 36th minute when he headed home an unpredicted cross.
Posted by Sadili Oval Player Testimonials at 12:52 AM No comments:

Two Sadili Oval teams, Sports for Life and Nature and Sports, sailed through their quarterfinal matches at Langata High School
Young Talents 2 Ligi Ndogo 3
The warm equatorial morning would set stage for a one sided affair between these two teams who have always met at the top league. The best of matches of the day would see Kaka’s Charges miss two very important chances that would have left Ligi licking their wounds .Brian Ochieng, George Mwendwa scored for the Young Talents and Chris Ogutu’s 2 and Julian’s 1 sealed the deal.
Sports for life 4 Milimani Primary 0
Kevin Owino’s 2 goals, Charles Maguto’s 1 and Erick Onyango’s 1 could see a hapless Milimani primary out of the prestigious trophy. But the future is beckoning for Sports for Life. An easy match at the quarters may cause them trouble at the hot semis next week. Lets wait and see.
Lavington United 2 Hope Stars 0
Wario Wako and Felix Njuguna’s goals would lead the pack in tormenting the Hope Stars goalkeeper’s confidence. The duel became so tense that even the referee mistakenly handed out a yellow card in place of the suspension card. The midday sun not only did shine on Lavington United but also worked to scorch the Hope Stars.
St. Pauls 1 Nature and Sports 3
Tightest game of the day. Age verification and careful officiating became a necessity in this game that saw the teams proceed to post match penalties just after a 60 minute low shot from St. Paul’s John Mwangi that would have seen Nature and Sports out. It was curled so neatly that Javiras Okwanyo had to stretch his fingertips to deflect it into the side net. St. Pauls only converted one of their chances while Nature and Sports saw all their 3 spot kicks safely past the goalie and into the net.
Semi final action action continues next Saturday 19th March 2011 at Langata High School.
Posted by Sadili Oval Player Testimonials at 12:38 AM No comments: 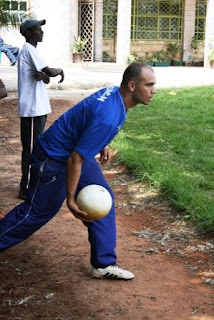 The Brazil Kenya League quarterfinalists were offered two weeks free training at Sadili Oval under the watchful eyes of 6 Brazilian national coaches, Nelson Rodrigues da Cunha, Guilherme de Almeida Fadlalla, de Sousa Lima, José Jober, Prof Walter and William Rodrigues also benefiting were the local coaches from the football clubs that brought in teams for the tournament who had a training workshop with the Brazilian Coaches. A total of 73 boys, 26 girls and 12 coaches beneffited from this training. Gor Mahia also got a chance to get specialised training for one afternoon at Sadili too!
The coaches selected 2 boys and 1 girl from the training sessions, who will have the opportunity to train in Brazil for 3 months later in the year, they are: 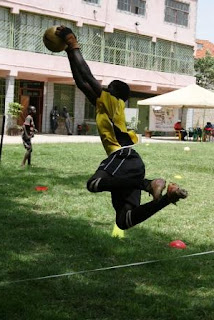 Posted by Sadili Oval Player Testimonials at 12:29 AM No comments:

Five girls teams who participated in the Sisterhood World Cup 2010, seized the opportunity to show that girls can also take some initiative and join a previously Boys Only league, by playing a one-day football event.
Results
Sadili Queens were unbeaten garnering 10 points overall, while God's Last Appeal edged out Sunderland closely to take the 1st runner-up position.

Posted by Sadili Oval Player Testimonials at 12:08 AM No comments:

Media release from the Organising Team: 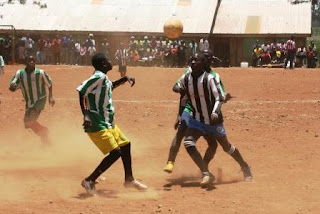 Curtains came to a close in the Sadili Leg of the Brazil Kenya football league in style. 2 days of intense soccer action was exhibited at two soccer venues that are the sports for life grounds and the Undugu rounds deep inside Kibera. The event which was graced by 25 teams, 3 travelling all the way from South Nyanza and the urbanly Kisumu City, one hiking their way through the Kibera slums from Bulbul and One from the Nairobi Periphery that is Kahawa created the best platform for the rest of teams from Kibera to gauge not only their skill levels but also their strength levels.
The day characterized by dusty clouds, scorching heat and athletic play saw favourites More fire lose a third place trophy  at their own backyard that is the Undugu grounds,Nyanza and Awimbo from South Nyanza rocked by the Nairobi teams and Rift Valley’s Young Talents end their league campaign with the highest of spirits.
This version of the Brazil kenya football league is run by Sadili Oval Sports Academy and sponsored by the Brazilian Embassy, BrazAfric, Carlsonwagonlit, and East Africa Brazil among other companies.
The teams 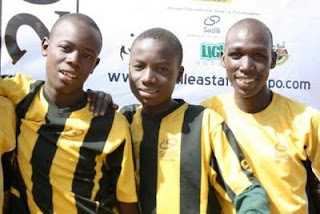