Davis Matanda powered his way through to the Boys U12 singles quarterfinals of the ITF/CAT KIA Motors Junior Competitions in Mahe, Seychelles, trouncing Denzel Laporte 6-0 6-0. His team mate, Antony Hoka followed suite, easily flying past Arnold Mein (Seychelles) 6-1 6-1 to set up a quarterfinal match against Reunion Number 2 and third seed, Samuel Verbard, where he lost 6-0 6-0.

Matanda later played against Seychelles number 2 and fourth seed Shaun Andriamaro, losing in a long tough quarterfinal match that was not reflected in the final scores, 1-6, 1-6. Both boys finally settled on position 7 (David) and 8 (Antony).

Davis and Antony partnered to beat Noah Jean-Louis/Christian Payet (Seychelles) 6-3 6-2 to reach the boys doubles semi-finals, where they met Damien/Shaun (sey), losing 1-6, 3-6. They then went on to overpower Seychelles to win Kenya their first bronze medal of the boys under 12s this year.

Posted by Sadili Oval Player Testimonials at 12:01 PM No comments:

Safari Sevens 2010 semi-finalists and 2012 quarter-finalists, the Grenoble University,  stopped to run a rugby clinic at Sadili Oval Sports Academy and a visit to the Kibera Slums on the 21st of September 2012. 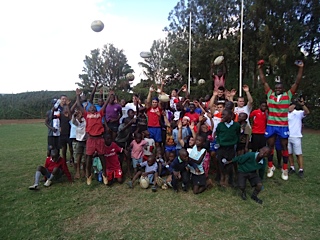 The youthful team, which is managed by a charismatic coach and team manager, Monsieur Pierre Chaix, arrived at the Academy at 1430 hours and quickly set on running the excited academy players through the paces. Amongst the skills taught by the Grenoble University players were passing off the ground, the ruck, the scrum down and the line out. 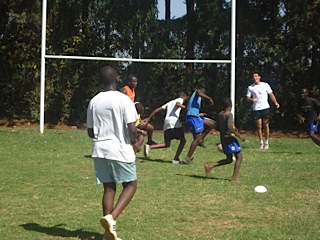 When reached for comments on how he thought of the skill levels in the rugby academy, professional rugby player and captain of the Grenoble sevens side in this year’s Safari Sevens was quick to post a positive one, saying “these kids have improved three-fold of what they were last year, they are now aware of the competitive side of rugby and can not only pass the ball but also play a match against us.”
At 1600 hours, the team visited Ujamaa Community School, a beneficiary of Sadili Rugby Academy located in Lindi, Kibera, where they donated stationery. Kibera is among the harshest places in the world, and the Grenoble University players who affirmed that they were from affluent families back in France were hugely emotional at witnessing the conditions of life present in the slum. Thibault Gery, a second year student at the university and a core player who accidentally tripped and fell in a trench on the way to Kibera was as equally emotional as his teammate Ilwo. And they promised to come back next year with more stationery to boost levels of education of the schools involved in the rugby program. 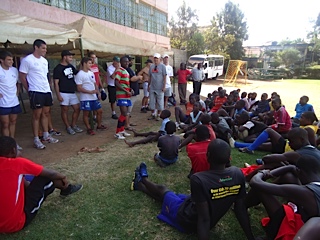 The visit from Grenoble university forma part of a joint partnership between the Embassy of France and Sadili Oval, a non-profit sports NGO, to set up one of Kenya's first rugby academies, providing hope to young Kenyans, particularly those from the Kibera slums, who form part of Sadili's programs.

You can see more of this visit on
http://www.youtube.com/watch?v=23iWRt5jh-4

Posted by Sadili Oval Player Testimonials at 8:00 PM No comments: 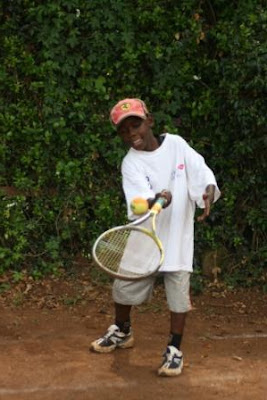 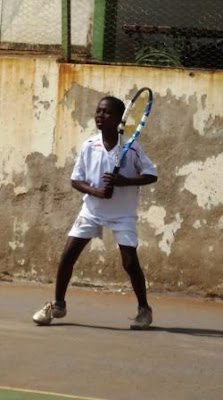 Posted by Sadili Oval Player Testimonials at 12:17 PM No comments: