Children under WASH program from Kibera slum were treated to a basketball tournament  at Sadili Oval's dusty Kibera tennis and basketball court on Saturday 28th, May, 2016. The basketball tournament was organized by Sadili Oval staff among them were coaches Asha Adongo and Trizah Mboya.
52 talented and excited children between 8 and 12 years turned up for the tournament which kicked off at 3pm as Coach Adongo introduced a flipping – note method to determine which team would start. The kids were divided into two teams; Blue team and Red team respectively, each team was composed of seven players and two bench-servers from each side.

Among the spectators was the Kibera tennis court caretaker, Mr. Wasonga who enjoyed the tournament throughout. Some of the kids could not manage to sit down long enough when the Blue team scored their first goal instead they broke into a dance to celebrate making the game more interesting.
Due to the large numbers and need to give everyone a chance the first session of the tournament lasted for one hour before half – time break! The two coaches coordinated this entertaining tournament and introduced a 30-minutes training before the second part of the game, the goal was to introduce a life skill, highlight the mistakes made during first – half and to help the kids exercise.

In the second – half, which also took an hour, the game became a neck to neck battle since the two teams had locked scores 1-1 and each team wanted to emerge the winner. On the other hand, the fans became more cheerful and their undying support to the individual teams kept the players moving and more aggressive to defend the winning title.

The whistle was blown on top of the hour to end the match and following an itch to have the winner from the lively spectators, the basketball rule had to be broken which added more fun into the day; a delightful session was introduced where all the players and the coaches, tried their luck to add in more scores for the respective teams. Coach Trizah managed a score for Blue team. 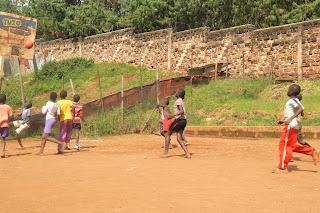 
The tournament came to an enthralling end with team Green having lost 3 – 2 to Blue team.

This court, originally an area used by women for cultivating vegetables, was offered by the women of Katwekera to Director, Dr. Liz Odera, for use as a safe space for their kids to learn sports. It has now become the only space available for open play, and life skill learning, managed by Sadili Oval's trained social educators and community coaches.