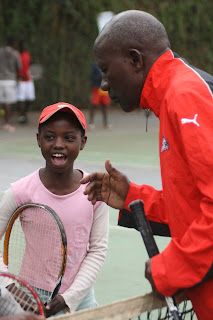 The 14th annual  East Africa Safari Junior Tennis came to a close on Sunday 18th August 2013 after 14 days of quality learning under some of Africa's best professionals: 1. Mr. John Kasule, PTR Professional, Clinician and Tester, and Administrator of the Uganda Lawn Tennis Association, 2. Katsuya Otsu, Professor at Department of Sport & Leisure Management School of Physical Education at Tokai University Japan and a member of the Japan Olympic Committee and Global Sports Alliance, 3. Dr. Liz Odera, International Tennis Professional, PTR Clinician and Tester, as well as camp director. The Camp Coordinator was Rehema Akinyi, under whom the camp and tournament program was managed, with a program that included Training at Sadili Oval, Smashers Challenge Tournament at Karen Country Club, Second Training at Sadili Oval, and the East Africa Junior Open at Sadili Oval. 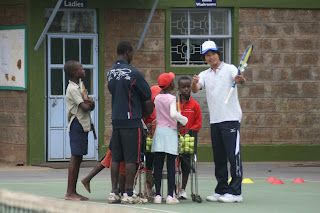 A brainchild of International Tennis Professionals and managed by Sadili Oval Sports Academy since its inception 14 years ago, this camp remains the most prestigious event in the tennis calendar in the region, and continues to attract large numbers of talented junior players between 6 and 18 years, from USA, Africa and Europe, to train and also compete in the East African Junior Tennis Open that marks the end of each camp, annually. Professional coaches who have attended the camp in the past include Coach Bill Murray (former coach of Venus and Serena Williams), Greg Moran, top coach and celebrated writer, and Paul Holbach, Coach of Lindsay Davenport. The camp is sponsored by Professional Tennis Registry, NJTL, Sadili Oval, Global Sports Alliance, Oncourt Offcourt and Sarova Hotels. 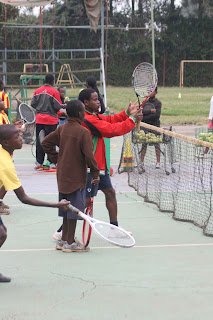 The event also marks a well-supported one-year Star Search, that is taking place around the East African region, beginning in Nairobi during the Junior Camp in December, then followed by Mombasa, and running through Kisumu, Kampala, Bujumbura, Kigali, Arusha, before completing its journey back in Nairobi in November. Products of this camp include Amadi Kagoma, Maurice Wamukowa, Rahab Mbugua, Joab Odera, Aziza Butoyi, Terry Odera  and Amadi Kagoma (all currently based in USA).

In an interview at the camp, Dr. Liz Odera said, "We have successfully produced two decades of great junior tennis players, and its time to begin a new cycle of stars who perform well, in both school and tennis. Arrangements have been concluded to make this even better with new programs coming up to make this possible with the expansion of the Sadili Africa Talent Training Academy, which includes international learning support and expanded schooling partnerships". 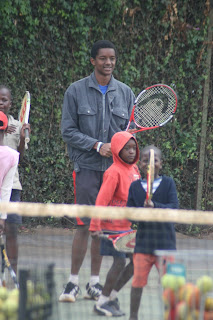 Posted by Sadili Oval Player Testimonials at 5:30 AM 10 comments: 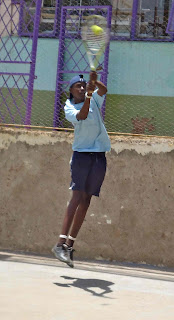 Spectators were treated to an exciting time at the EA Junior Open when the Boys U-18 saw Robert Kasombo (Kenya) beat John Lutaaya (Uganda) 6-4 6-4, to lift the title.  Kasombo had earlier overcome Josephat Garo (Kenya) 7-6(4) 7-6(1)  in a close semi-finals,while John Lutaaya (Uganda), upset top seed Amon Muinde 3-6 6-4 [10-7]  in another close encounter. The finals was a serious clash of wills, with Kasombo eventually prevailing 6-4 6-4. The pair of brothers (dubbed the "Nzuki Brothers") Kasombo/Muinde, showed a sign of great wins to come for Kenya, when they beat Garo/Lutaaya 6-2 7-5 in what spectators agreed was the most exciting doubles finals in recent past.

The Boys U-16 was an all-Ugandan affair, with Frank Tayebwa beating Boris Aguma 7-5 6-4 to lift the title from a field of 16 of the best boys from the region. Ian Okungu (Kenya) won the Boys-U12 ahead of compatriot Solomon Maloba (Kenya), while Antony Owita (Kenya) took the books U-14 with 40 points with Davis Matanda (Kenya) as runner-up with 30 points.

In the girls U-14, Saidat Kemugisha (Uganda) took on Winnie Birungi (Uganda) in the semi-finals, winning 6-3 6-4 before dominating over Elizabeth Aluoch (Kenya) 6-2 6-2 to win the title with ease. Saidat/Birungi took home the G-U14 Doubles for Uganda.

The EA Safari Junior Tennis Camp and the Junior Open is the main platform for juniors from within the region to showcase their talent, in order to receive technical support as well as compete for limited scholarships available every four years at the Sadili Africa Talent Training Academy. Recipients of the 6 scholarships available will be announced at the beginning of September 2013.

The EA Junior Open is a level B ranking tournament recognized by the Tennis Africa Cup (www.tennisafrica.info).

Posted by Sadili Oval Player Testimonials at 12:30 AM No comments: 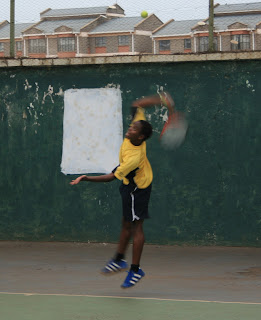 all opposition to reach the finals of the boys singles, boys doubles and girls doubles, as representative team from the Metropolitan Games. In the Boys Singles semi-finals, Henry Ayesiga

singles, Henry beat Aberdare Player 1 in  2 sets to 0 of 4-2 4-1, then advanced to the finals where he trounced team mate Isiah Etale 4-1 4-0 to complete an undefeated run.

The Girls Doubles saw the first pair of Melissa Brown/Chizi Mutsumi down Lake Region in 2 straight sets 4-0 4-1 in the semifinals, before pushing for a quick finals against Nzoia, which they won 4-0 4-0.
The boys doubles had last year's undefeated pair JaminLuvembe/John Lutaaya, who quickly dispatched of Nakuru 4-1 4-0, and barely broke sweat to down Lake Region 4-0 4-0.

Tennis will, for the first time ever, feature in the East African Ball Games, and the players, who will be undergoing further training at Sadili Oval Sports Academy, will be pleased to represent Kenya and Malezi School there, from 22nd August to 2nd September 2013. Says their coach Dr. Liz Odera, "We will need to stay focused throughout and prepare well, so that we can perform to the best of our ability, and bring the trophy home."

As national champions for over 11 years, why not?

Malezi Hold Firm At Nationals As They Head to Tennis Semis

The Girls Doubles Team Of Chizi/Melissa have played and won two matches, winning against Central 4-2, and Nakuru 4-1.

Jamin/John have not disappointed the fans, as they mauled Lake Region  4-0, Nzoia 4-0 and  Eastern 4-1 in their run to the semi-finals, which will be played tomorrow.

Posted by Sadili Oval Player Testimonials at 9:30 AM No comments:

The Langata Junior Championships at Sadili Oval Sports Academy was today hit with major upsets when KLTA top-ranked player and Under 18 Boys number 1 seed, Sheil Kotecha lost to Sadili Oval’s John Lutaaya in a surprising twist of events, in which both players won a set each and settled down to closing it off with a super set that Lutaaya won 10-7.
The other major upset saw 2nd seed Robert Kasombo Nzuki, lose to 3rd seed Henry Ayesiga 6/2 7/6 (7).  Impala’s Marie Owino grabbed the Girls U14 beating Tonia Kubai 6.3 6/3, while Sadili’s Belinda Awino showed her dominance in the Girls Under 12 against team mate Alice Ayoma 6/2 6/2. Newest young talent from the Kibera slums, Charles Ochieng, overcame Impala’s Jacobs Sergelen 6/1 6/4 to lift the Boys Under 12 6/1 6/4.

The Boys Under 18, pitting fourth seed Amon Muinde, against Henry Ayesiga, will be played tomorrow morning.
This tournament is the first of a series of events in the Nairobi County Tennis Association, that will be run in various parts of the city.

Posted by Sadili Oval Player Testimonials at 12:35 PM No comments: