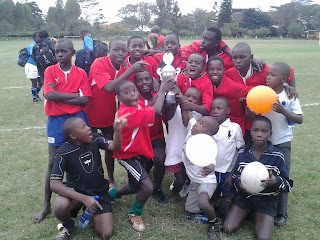 Obelix sevens staged at the Braeburn Garden estate school, Nairobi. The team comprised of junior players from Kibera of average age of 14, managed to post scores which many former Kenya Sevens players and rugby fanatics present at the venue lauded. Pool stages In the pool stage, the team took off to a flying start with a 3-0 thrashing of Red Land Roses 1. The second match however took a different turn for the team when they lost a narrow 3-2 to Naivasha nuts, a match which was filled with emotional jibe from the Nuts players who were trailing 2-0 by half time. It is considerate to state that the players were a little immature in containing the Nuts’ mental play; something that will surely propagate in them as they grow in the sport. In the last match of the pool stages, the boys managed to put up a spirited fight against Les Gaulois 1, a team comprised of current Kenya Cup players and seasoned French Rugby Expatriates, never looking down even when they encountered a humbling 5-0 loss. It is important however to note the ingenuity of the youngest players in the team; Brian Angote and Michael Ochieng who stepped up on defense and worked to orchestrate a series of fluid attack moves only to be caught at the edge of the area. Cup stages Meeting the Kenyan based British Army Rugby Team in a bowl semi final pairing was obviously a mean feat. But the boys didn’t even have a clue of who the british army were and I believe this mentality carried the team forward to winning 2-0. A Bowl Finals pairing against Red Land Roses 2 would be an easier task to accomplish, the final score 2-0 with George Ondondo (15) and Michael Ochieng (13) touching down for the winning tries. Players showing promise The event not only exposed the current top cream Sadili Rugby Players to top flight rugby competition but also created a possible opportunity for boot sponsorship from Red Land Roses.
Special thanks Special thanks go to Sadili Rugby Academy, the French embassy and Les Gaulois for facilitating the team’s participation in the event. -- FRANCIS ISIAHO MUHANJI
Posted by Sadili Oval Player Testimonials at 1:21 PM