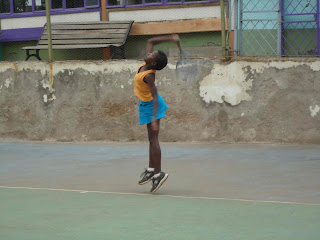 12 year old Sada Nahimana (Burundi) of Sadili Africa Talent Training Academy, today trounced Aisha Niyonkuru (ITF Burundi Centre) 6/1 6/1 to lift the Girls Under 14 title in the finals of the East Africa ITF/CAT U14 tournament, held at Mombasa Sports Club, in Kenya. Sada had trounced Faith Nyabera (Ken) 6/1 6/0 and Tonia Kubai (Ken) 6/3 6/3 in the semi-final and quarterfinals, respectively, to assure herself a place in the finals. Sada partnered with Aisha in the Girls U14 doubles to take the crown too. "Sada is finally getting the qualifications she struggled with, and will soon be almost unbeatable". says Head Coach, Dr. Liz Odera, when we approached her for comment.

In the boys Under 14 category, her 12 year old Sadili team mate, Anthony Owita, won his first round match against Pius Maundu (Ken) 6/2 6/0, before losing to Seed 2 Frank Menard (Tan). He completed the tournament in an honorable position 6 of 16 players from East Africa.

The tournament served as an excellent platform for Sadili's tournament newcomers, aged between 11 and 12 years, emerging to serious competition. Davis Matanda ended the U14 ranked 14/16, and
Charles Ochieng 15/16 in the U12 Boys. Alice Ayoma and Elizabeth Aluoch completed the event with 6/8 in the U12 and U14 categories, respectively, gaining valuable experience.

The 2nd tournament will run from Thursday 2nd May 2013.
Posted by Sadili Oval Player Testimonials at 3:04 PM No comments: