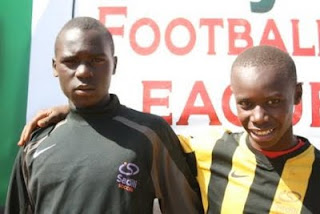 Sadili soccer is playing U 13 and U 15 categories at our first Left Foot Soccer League. In the ongoing U15 category Sadili team is in the "group of death", Group A. Sadili first played Shangilia from Kangemi, in a tough opening encounter, with Sadili requiring the magic of Eric Onyango who scored twice before Jesse Mwenda applied his swiftness and Kevin Owino, his intelligence, to thrash their opponents 4 – 1. In the second encounter Sadili Soccer Academy played Milimani Primary, a tactical game which worked for about 10 minutes, before the impatient and roaring Sadili team took lead with a culminating shot from Jesse Mwenda with John Peter closing the door, to end the match 2 – 0. The third match was a walkover since Lavington primary were unable to compose a team.
The U13 team is drawn in Pool B and, after playing two matches, they are lying 4th in the group with four points. In their first match, Sadili played Millimani Primary winning 4-2 from the artistic play of Levis Osena scoring a hat trick and Evans Otieno coming in from the bench to put his name in the score sheet with a clinical finish from a superb pass of Dennis Isiau. In the second match it was a battle of nerves where the unbeaten Victoria Academy had to take on a tactical Sadili Soccer Academy but it was Sadili who saw the net first. It took Antony Omondi used his swift left foot well to separate the two sides with a distance shoot that went straight into the far corner of the net thus giving Sadili the lead in the first half. Coming into the second half a controversial substitute player of Victoria academy destroyed the Sadili's organized midfield and went for an equalizer the match ended in a draw of 1-1 though it was under protest match and Sadili can be awarded the point if the organisers fail to approve the age of the substitute player who gave them the draw.
Posted by Sadili Oval Player Testimonials at 10:42 AM