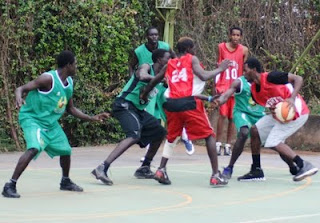 The Sadili Teen Tournament ended today with Malezi Boys showing why they are the upwardly mobile school team to watch in Nairobi, beating Mennonites 51-39 to lift the Under 18 Boys. Malezi defended well, with Rogers Ochieng making a couple of important steals, and, by half-time they were leading 37 to 19 points. The post-players Lino Manyuel assisted by Emmanuel Atega 15 and 12 points, respectively. Assists from Point Guards Zack Okong'o made free throws to grab 7 points, and John Madol who came off the bench to score four vital points. A disappointed Mennonites Captain, Abdi Hakim Omar, said that they accepted defeat, but hoped to revenge this game again in the near future.
The Boys Under 14 was a round robin event:
Tom Munyama vs, Sadili 30 - 29
Mennonites vs. Sadili 20 - 19. Sadili came from down at half -time 14 -9, playing from defence and making use of their post player Isiah Ater, to score 12 points for the team.
Mennonites vs. Tom Mnyama 18 - 16
Tom Munyama fought hard but lost. By half-time it was 12-5 to Mennonites. Neville Ochieng of TM made 9 points for his team, but due to time, the game ended with them trailing by 2 points, giving Mennonites a win.

Under 12s:
Mennonites vs. Tom Munyama
Mennonites won 11-2, with top scorer Liban Hussein, tying with Abdi Rahman, 4 points each for their team, while Ian Otieno of TM scores 2 points for the losing team.