Sadili's own Hassan continued to impress pundits with his performance at Junior Wimbledon, being the only wild card to go through the qualifying round successfully to enter the second week and making his first kill in the first round of the main draw, and bouncing into the second round with gusto yesterday. After grabbing a strong first set 6-4 and setting up to grab the second, Hassan had to take a rain break at 5-5 against his favoured opponent, Frederico Ferre Silva in what was a nail-biting experience for the crowd that gathered in the dreary English weather to watch an unexpectedly exciting Junior Wimbledon match. 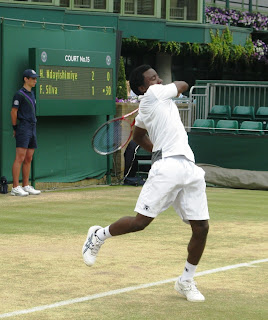 As they returned to resume their match a couple of hours later, it appeared that the news had spread, a little (and only) African boy was playing some inspirational tennis and his match was "a must watch". The stands were full now, and the atmosphere was electric. For Hassan, this was yet another chance to play his best, and he did not let his supporters down, giving as good as he got, varying hos shots between flats, slices, drop shots and topspin, in what was considered by many, and amazingly positive change of game, from the standard fare that has become the style of players at the Grand Slam. Hassan's opponent, Frederico Ferre Silva came into this round having upset the 12th seed of the tournament, and it showed in the level of play, which Hassan made up for with "gutsyness" and sheer wit.
The second set went to Frederico, 7-5 and was followed by a closely contested final set, that saw Hassan lose the set and match at 4-6, down, but not out! This match raised a lot of interest in African Tennis and was widely covered by media. Hassan becomes the first Burundian to play a Wimbledon Junior and an inspiration to all, especially the kids of his former training academy, Sadili Oval, on the outskirts of Kibera, Africa's largest slum, who received a blow by blow account through friends and Hassan himself (afterwards).
Posted by Sadili Oval Player Testimonials at 10:24 AM No comments:

Hassan Progresses To 2nd Round In Wimbledon

As Wimbledon giants Tomas Berdych, Serena and Venus Williams tumbled, East Africans had reason to smile as Hassan Ndayishimiye of Burundi today successfully made it through the first round of Wimbledon, beating Mattias Sborowitz of China, 6-3, 6-4  in the junior boys draw. Hassan, who had to go through a tough qualifying draw that saw him play and win against World class juniors,
He is poised to meet Frederico Frere Silva of Portugal, who beat the 12th seed of the boys tournament to earn a second round berth.

Hassan, hails from Buyenzi, a slum in the heart of Burundi, where his father, a coach at a local tennis club, first introduced him to tennis. Hassan was at 9 years, spotted by a international professional player, Martin Dzuwa, playing in the back courts of the club, and he persuaded a local member, Kassie McIlvaine, to send him to a humble little 3-court tennis centre at the edge of Kibera, Africa's largest slum in Nairobi, Kenya called Sadili Oval Sports Academy, where he honed his skills and the watchful eye of PTR Professional Dr. Liz Odera, and finally went to formal school, for 4 years, before returning home.

Hassan received a scholarship to the ITF Centre in Pretoria, where he has been for the last two years, and which changed his tennis life immensely, as he was able to play many top level tournaments in Africa and more lately in Europe. Many of his friends and opponents alike, will remember Hassan, and how he lit up the tennis stage in Kenya, as a little boy, challenging and often winning matches against top juniors, many three to four times his age. Hassan's stab at Wimbledon is an inspiration to many children of Buyenzi, many of whom, like him, work as hitters for the rich at the local tennis club. For them now, the sky is the limit. Kassie continues to watch and care for Hassan, and she was there to watch him win his first singles round at Wimbledon. This win makes Hassan the first Burundi national in history to advance in the main draw of Wimbledon.
Posted by Sadili Oval Player Testimonials at 4:47 PM No comments:

3 June 2011 Hassan Gets His First Chance At Wimbledon

Sadili Oval former player, Hassan Ndayashimiye, will bring the little tennis programme to the forefront this month, when he plays qualifiers at the coming Wimbledon Grand Slam in England. Many Kenyans will remember how he scillintated the tennis scene between 2004 and 2007.

Hassan was born on 12th August 1994, the son of a hitter at a local tennis club in Bujumbura. Hassan started to play early in life, finding solace from the slums, where there was very little happening, and earning some little money each day from picking balls and later hitting with senior members, and taking home to his mother to help out with daily survival. Everyone knew Hassan for his spritely and sunny personality, and he quicky became loved by members and visitors alike. It was this that got him noticed by Kassie McIlvaine, who was working with CARE are Country Director. Hassan was only 8 years old at the time, and already she could see his talent, and knew that he could go far with the right help and change of circumstances. In fact, Kassie often joked with Hassan about , "When you get to Wimbledon...."
In 2003, An ITF East and Central Africa event was held in Bujumbura, and Kassie, always an avid tennis fan, went out to watch. There she met a couple of tennis players from Kenya. She admired their game, and got talking to them about places to play and study in Kenya. She finally made up her mind to bring Hassan to Dr. Liz Odera at Sadili Oval and the adjoining Malezi School, after chatting with Martin Dzuwa, who won an ITF Money Circuit later that year. Hassan's first comment when he landed in JKIA and met Dr. Liz was, "now this is my home, I am going to live here, and I am going to beat everybody in tennis, even the biggest and the best". And indeed, after a painful beginning in which he struggled to adjust his strokes, grow a little stronger (Kassie placed an order for extra milk every day), and stay committed to serious training, Hassan went on to humble many unfortunate local players from under 12 to under 16 years. Hassan stayed at Sadili for four years before returning home, performing well at an ITF U14 event, and qualifying for a place at the ITF Centre in Pretoria, where he has worked under the watchful eye of Dermott Sweeney and Margaret Owen.
His performance continued to improve, playing regional tournaments for his country (AJC, each year, with his compatriot Amadi Kagoma, who is now at Sadili Oval Talent Training Academy), and in the European Circuit. Last month, he reached a record high of 113 ITF rank, making him the two top East African to reach this level in the last 20 years, the other being Vitulli of Kenya, who is now a student at Georgia State University in the USA. Kassie's belief in Hassan has come true, and, while ITF provides for his schooling, training and tournaments, she continues to work hard to support Hassan, treating him as her own son, following his progress closely, buying him racquets, kit and sometimes arranging for his transportation when it is not available. His former coach and mentor, Liz Odera and his close friends in Sadili provide him with important moral support and advise, firmly believing that Hassan will make it in the end.


Posted by Sadili Oval Player Testimonials at 7:07 PM No comments:

Sadili's Shebani Kabura took a break from class to grab the top boys 14 and Under position from his team mate and tournament favourite, Henry Ayesiga at this year's Wanjiku Ngaruiya Tennis Tournament, held at JD Tennis Academy, Nairobi. The match, which was one of the longest of the day, earned Shebani a win in 3 sets 2-6, 6-3, 6-1. Shebani has earlier won against another team mate and newest addition to the academy, 12 year old Olivier in two straight sets 6-2, 6-1.
Posted by Sadili Oval Player Testimonials at 6:56 PM No comments: